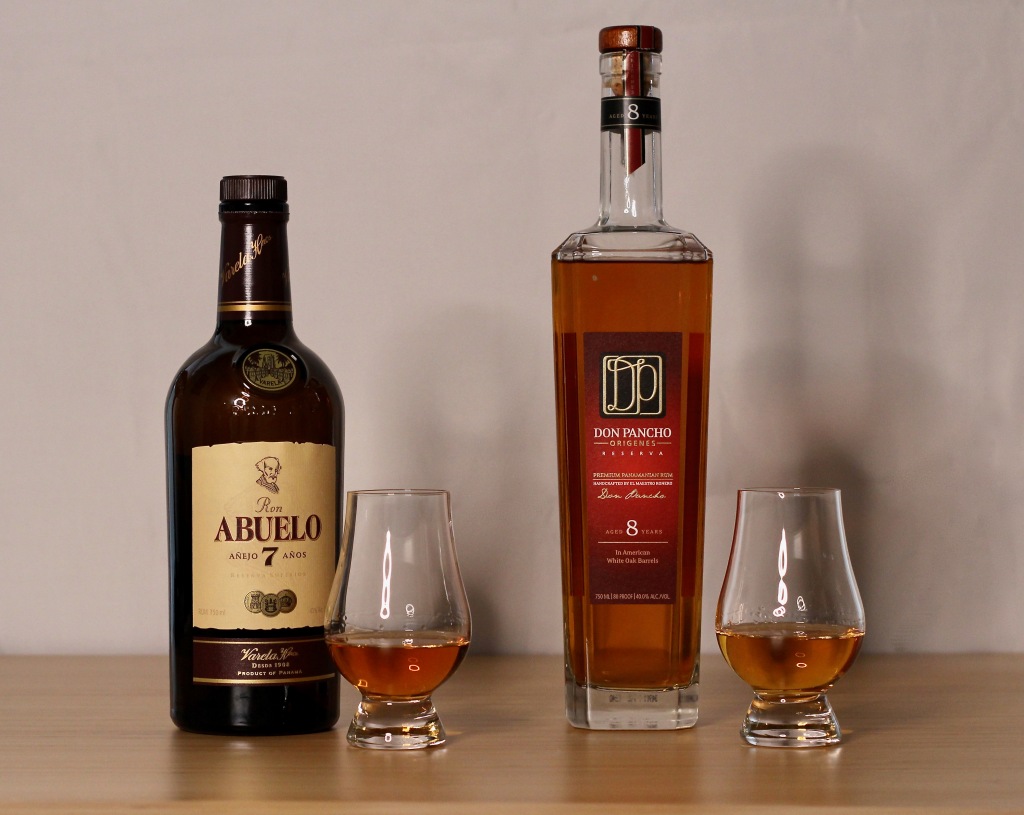 The Ron Abuelo and Don Pancho rums are both distilled in Panama, but with very different profiles. The Don Pancho Origenes line, at Las Cabras distillery, was created by Master Distiller Don Pancho as a culmination of the experience across his career – including his time in Cuba as the Minister of Rum, as well as his experience operating a distillery in Panama. Ron Abuelo, on the other hand, has a longer history in Panama going back decades.

I set out to compare these two distinct rums to get an idea for both the range of Panamanian rum available, as well as how a Cuban-style rum compares to the rest of the rum market (given that I’m not aware of any ways to legally obtain Cuban rum at this time). I purchased both at Binny’s Beverage Depot, where the Ron Abuelo was going for $30 at the time, and the Don Pancho for $35. This is not cheap by rum standards.

On the nose, the Ron Abuelo comes across a bit harsh, with a little burn, followed by notes of molasses, spices, and tobacco. The Don Pancho is very easy-going by comparison, with a hint of honey (which reminded me of Macallan 12).

Both the Ron Abuelo and Don Pancho went down relatively smooth, although there was some burn on the Ron Abuelo, which I expected. The Ron Abuelo had a heavy body that seemed like it would serve as a good foundation for a boozier Tiki cocktail, whereas the Don Pancho had a medium body.

The molasses and tobacco flavors of the Ron Abuelo followed through, and it was similar to other rums of a similar age that I’ve had (such as Real McCoy 5). The Don Pancho’s honey notes carried through to how it tasted, and I also caught some vanilla notes. There was some astringency in the Don Pancho that reminded me of some Puerto Rican rums I’ve had, which wasn’t present in the Don Pancho.

Overall, the Don Pancho is probably the better rum for sipping, but most of the time I’m using rums for tiki cocktails. I ended up making an excellent Jet Pilot using the Ron Abuelo (which is pricey, but rum is meant for drinking, after all) after comparing the two rums, while I’m planning to use the Don Pancho Origenes in a mojito at some point.

iThere are no comments

Begin typing your search above and press return to search. Press Esc to cancel.