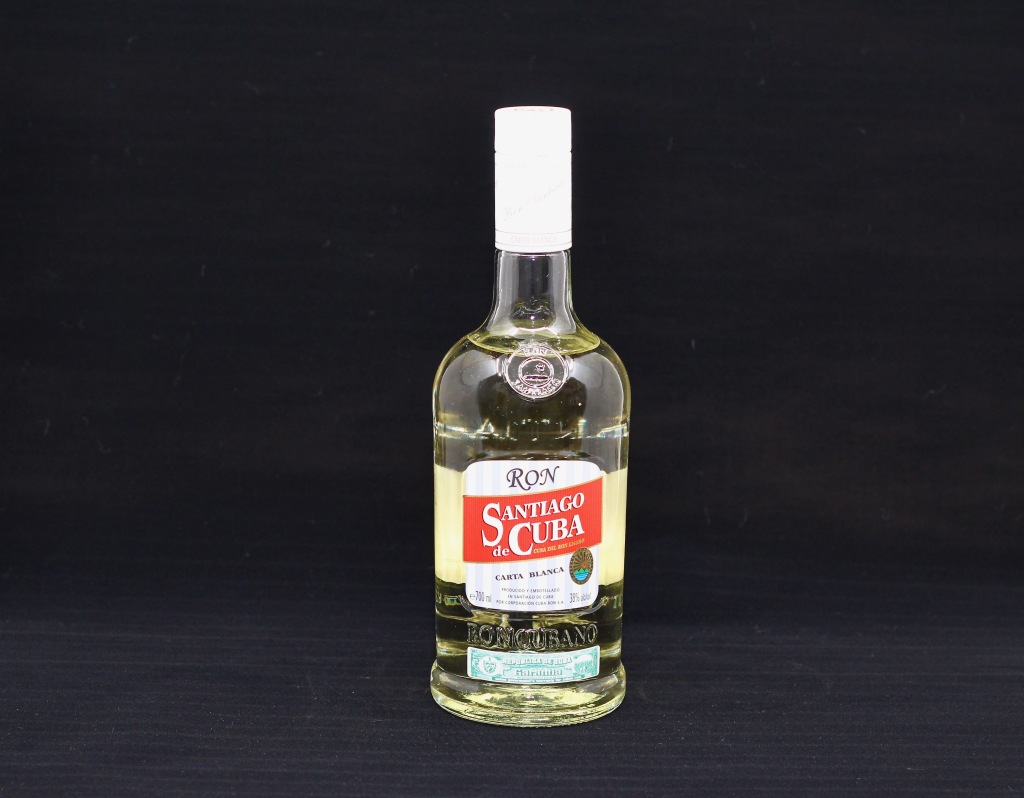 In my quest to see what cocktails were like back in the early days of tropical cocktails (“tiki” cocktails), I recently obtained some Cuban rums. One of these was the Ron Santiago de Cuba Carta Blanca, which is a white Cuban rum bottled at 38%. Honestly, the only reason I bought this one was that Havana Club 3 Year (their white rum) was sold out, but it worked out just fine for me in the end.

Some internet sleuthing helped me confirm that Ron Santiago de Cuba is made in the distillery that was owned by Bacardi before the Cuban government expropriated it. I’ve been reading a couple books on the history of Bacardi (Bacardi: The Hidden War by Hernando Calvo Ospina, and Bacardi and the Long Fight for Cuba by Tom Gjelten), which speak a little about the origins of Bacardi in Santiago, Cuba, so this was exactly what I expected. It also means that this rum might be a bit more reminiscent of the “original” Bacardi Cuban rum than most.

Anyway, as you can see, this isn’t a super elaborately packaged bottle. Along with the fact that it’s bottled at a pretty low 38% ABV, it seems like it’s targeting the lower end of the market. Given the aging requirements around Cuban rum, however, I was still expecting it to be better than most white Spanish-style rums on the US market (which it was).

The nose on this rum is pretty simple, with some notes of citrus peel that remind me of Bacardi rums, including the Bacardi anniversary rum I recently reviewed. After taking a sip, the citrus peel notes follow through to the taste, and there is some mild burn. I do get vegetal notes on the palate as well, which surprised me. Served neat, this isn’t a very remarkable rum.

After trying this on its own, I made a couple mojitos with it (thanks to my patio-grown mint), and this rum really started to shine. These were some of the best mojitos I’ve had – light, refreshing, and easy to drink. The lower ABV probably had something to do with this, but the rum was definitely better than most of the lightly aged rums I’ve had.

Overall conclusion: if you get a chance, this is a good rum to buy for mixing drinks, but I’d probably spring for a higher-ABV Cuban rum just to make cocktails more balanced. I have obtained a bottle of Havana Club 3 Year since I purchased this one, so we’ll eventually see how the two compare.

iThere are no comments

Begin typing your search above and press return to search. Press Esc to cancel.